Ecuador has a rich history of indigenous cultures and from these roots, many myths and legends have persisted. Mantas Pre-columbian ancestors were known as Manteñas. They thrived up and down the Ecuadorian coast in Balswood sailboats and rafts up until 1531 when Francisco Pizarro landed to the north in Esmeraldas. you can learn a lot more about the Pre Columbian cultures as well as more modern Ecuadorian History at the Ciudad Alfaro Museum complex on our Montecristi Panama Hat Tour.

What tickled my fancy while reading about Pizarro and his infamous conquest was a description of how Men from the Manteña culture removed their own 2 front teeth from the upper and lower jaw. The legend goes that a rebellion long ago against the Inca Empire resulted in their defeat and the curse of having to perform this act on every male for the rest of time. Thank Pizarro and his friends for getting rid of that one. While reading about this I opened up a pandora’s box of myths and legends coming from the ancient cultures, that still pop up in towns and countrysides to this day. Here are 4 of my favourite stories selected form the many Ecuadorian legends.

The goddess Umiña was considered the goddess of health for the Manteña culture. It Umiña was the daughter of a chieftain and her mother was a well known and much-loved healer and priestess. When she was young, her mother mysteriously died. Umiña took her mother’s place and quickly became beloved by the people for her healing abilities. After a year had passed the chieftain remarried to a local woman suspected of being a witch. You can guess where this is going. She was a Witch. She was jealous of Umiñas fame and cast a spell on the chieftain, convening him that Umiña must be put to death.

They tied her to a raft, sailed for 3 days into the ocean and then left her there with no food or water. Miraculously Umiña arrived onshore 3 days later. Still bewitched her father decreed she be taken to the tallest mountain and tied there to die of exposure. This time she appeared 3 months later, having been rescued by a giant condor. The town rejoiced and thankfully her father had come to his senses. He cast out the with and took Umiña back in. Happy ending right? Wrong, the with after evading the soldiers and some werewolf shenanigans snuck into the chieftains chamber and stabbed him to death.

They buried the chieftain and umiña threw herself onto the grave and ordered the soldiers not to touch her no matter what. After several days she died and her corpse wasted away leaving only her heart with had become a giant red Emerald. The local priests built a temple on the site and made a golden bust of Umiña with the emerald set into it. From that day on, legend has it that anyone who touched the emerald was immediately healed of all their ills. people were said to travel from Mexico, Peru and all of Central America to visit the temple to cure the ailments.

Umiña is the most famous legend from Manta. I live in a neighbourhood called Umiña and the best locally brewed beer is Named Umiña. Check out more on this delicious local produce and other great things in our article 10 things to buy in Manta.

The creation of the Sun (at least the 2nd one)

This legend is often told as a children’s story and has some pretty gaping plot holes that even my 5-year-old daughter has questioned. Nevertheless I find it quite fun.

Long ago when the old people could talk to birds, it was said that in the sky lived a huge Jaguar who only liked to come out when the sky was in total darkness. One evening the great cat was so hungry it devoured the Sun, leaving the earth in perpetual darkness.

The Tsáchilas people could no longer bear that situation because living in darkness, they had almost no food to eat. Analyzing what was happening, the sorcerers of the tribe concluded that the only solution to save themselves was to create their own sun. A very ambitious goal to say the least.

They chose a strong young boy for the ritual. Once finished the boy’s face began to shine, while his body began to rise. Everyone in the town was so excited that they went home that afternoon and slept, (not normally the response mas excitement produces), hoping that the next morning a beautiful and shining sun would be in the sky.

After 3 days of cloud, the 4th day arrived and the boy had converted into a brilliant sun. Only now there was another problem, it was so powerful that it blinded everyone who left their homes. The wise men realized that this young man now turned into an “Astro King” had both eyes open and that he should only shine with one.

The most veteran of all the shamans was charged with throwing a stone into one of the new Sun Kings eyes, to blind it forever. The shot was accurate and thereafter, the Tsáchilas and their descendants were able to follow their lives normally. Amazing cosmic throw by the Shamam. Although they need to sort out that space Jaguar before he makes a meal of the Astro King.

Those of you that know your Latin history will remember the boy from this story, Atahualpa. The future ruler of the Incan empire that was captured by Francisco Pizarro in 1531.

According to legend, Princess Pacha was the rightful heiress of her father’s throne of the Kingdom of Quito. The princess maintained a struggle of several years with the Incas, until the Inca Huayna Cápac, managed to defeat her.

However, the Inca king decided to make her his wife, due to her great beauty and his wisdom. She conquered the heart of Huayna Capac; he only sought to please her and kept his promises of peace and justice for the inhabitants of the territories of Quito. The two rulers lived in the beautiful palace called Incahuasi. In this wonderful place, the first of his children and future heir of the empire, Prince Atahualpa, was born.

Atahualpa, was educated from an early age to be a good sovereign and one of the most important lessons to learn, was to abide by and comply with the laws and provisions of his father.

When he was very young, Atahualpa, he was practising with his spear in the middle of the green forests and countryside that surrounded his palace. Accuracy with a spear was a highly regarded skill and Atahualpa received instruction from the best warriors and hunters in the realm. One day while practising,  a beautiful macaw parrot of vibrant colours stopped to rest in a tree nearby to Atahualpa. The prince saw the beautiful bird and thought it would be a very hard target to hit at this distance. To test his skill he took out his spear and with an accurate shot honed from many hours of hard training, killed the beautiful animal cleanly.

Atahualpa, ran excitedly, with his trophy, to show it to his mother. What an achievement for a young boy to hunt such a beautiful animal with such a precise and challenging throw.  But his mother, Queen Pacha, who was very wise, did not receive with joy the news of his son’s hunt.

Tenderly, she explained to the boy, the laws of their people. “The enemy is killed only in war because he then he carries weapons to defend himself”. Not so for the birds, which adorn nature with colours and fill it with charms and soothing songs and have no defence against our weapons. The boy realized his mistake and vowed never again to commit such an error.  Queen Pacha, took the beautiful feathers from the macaw and made the young prince a magnificent headdress. To be worn as a constant reminder of the lesson she learned that day.

I like this story a lot, although perhaps it might have benefited Atahualpa not be so considerate and peaceful, to the 170 conquistadors that invited him to a meeting in Caja Marca later in his life.

Ecuador has some amazing indigenous cultures that live in the Amazon rainforest and it’s not surprising that they have a lot of legends about respecting nature. Kuartam is one of my favourites.

According to legend, Yaupi was a young boy who always went hunting with his father and brother in the Jungle. The whole family was very respectful of the jungle and took from it only the food they would need to support the family.

Sadly, Yaupi was not the same as the others, and despite his father ́s teachings, he did not respect the traditions and often without need, without any reason at all and sometimes just for entertainment, tortured and killed animals. Nice fella, I bet.

Whenever the men went into the jungle, they heard the strange song of a sacred toad, which they called Kuartam. From the trees, the toad sang to the men “Kuartam, tan, kuartam, tan”. Yaupi when he heard it began to mock and imitate him, singing “Kuartam, tan, kuartam, tan, Let’s see if you can beat me.” His hunting companions told him that it was not good to make fun of the toad, that sometimes he became a tiger and ate the men.

One day he went hunting with his brother and father, instead of following the group he went off and looked for the tree where the toad san. The toad revealed itself to Yaupi, seated in an enormous tree. The boy stood in front of the tree and shouted: “Kuartam, tan, kuartam, tan, Let’s see if you can eat me”. No the best Idea in the world.

Suddenly a giant feline shape sprang from the tree. Yaupi was paralyzed by terror, and half of his body was devoured by the animal.

When they found his corpse, they knew it was the Toad’s punishment. Yaupi’s wife was enraged and went to the jungle accompanied by the women of the town. Together they cut down the Kuartam tree. When the heavy trunk fell, the toad appeared with a huge bloated belly. They quickly took their machetes and opened the belly of the beast, where there they discovered the half-digested remains of Yaupi.

Although her husband, Yaupi, did not come back to life; His story became a legend. Today, when they hear the toad Kuartam sing in the immensity of the jungle, The people know to respect nature or face the man-eating toad.

I could go on all day and fill a hundred articles about these fascinating myths and legends. I´ll leave some links to some of the best sources I found below for those who want more right away, and I´m sure I´ll do a part 2 soon. There are a lot of people that believe in Duendes, which seem to be like goblins, nasty elves or leprechauns, lusting after young women and performing all kinds of evil deeds. Many people from rural areas to this day believe in them. My Ecuadorian sister in law is one of them, claiming she has seen a Duende on multiple occasions. Many stories involve witchcraft and again to this day it is normal to see Ads in the local newspaper offering witchcraft services. I kid you not, to put it politely. For a mere $20 you could get almost any curse lifted or unattainable person to fall madly in love with you if you believe the Ad.

Leaning from Yuapi, I shall refrain from mocking any of these beliefs. You can learn a lot more about Ecuadorian History by visiting the Ciudad Alfaro museum complex. For more information, you can read about it on our Blog post 10 things to do in Manta.

Remember if you need any information about tours or, please visit Manta Ecuador Shore Excursions.

Ideal Tours For You
First time visitors guide to Manta 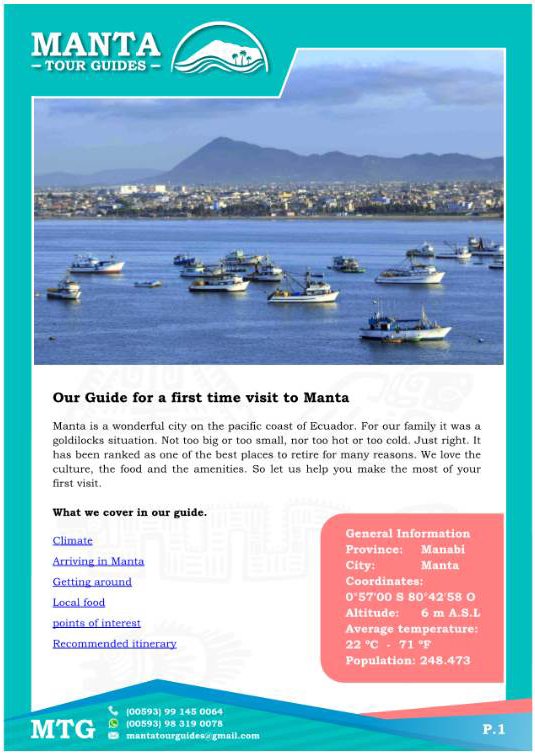